The all-stock merger between Foamix and Menlo has been badly received by the markets, but we beg to differ.

Basically, the merger reduces cost, risk and leverages the critical sales infrastructure already 90% in place for the upcoming launch of AMZEEQ in January.

There is a deal of uncertainty, as the post-merger ownership ratio depends a lot on the outcomes of two Phase III trials of Menlo’s Serlopitant.

We think that uncertainty has been sensibly dealt with, as failure in one or both of these tests significantly reduces Menlo’s post-merger ownership stake.

Foamix (FOMX) is an Israeli biotech company that has a number of dermatological products in various stages of clinical trials and one already FDA-approved and about to launch (January 2020).

It is merging with Menlo (MNLO), which has another interesting product currently in Phase II clinical trial, Serlopitant.

The company has a number of drugs in the pipeline, in different stadia of trials and approval. From the earnings deck: 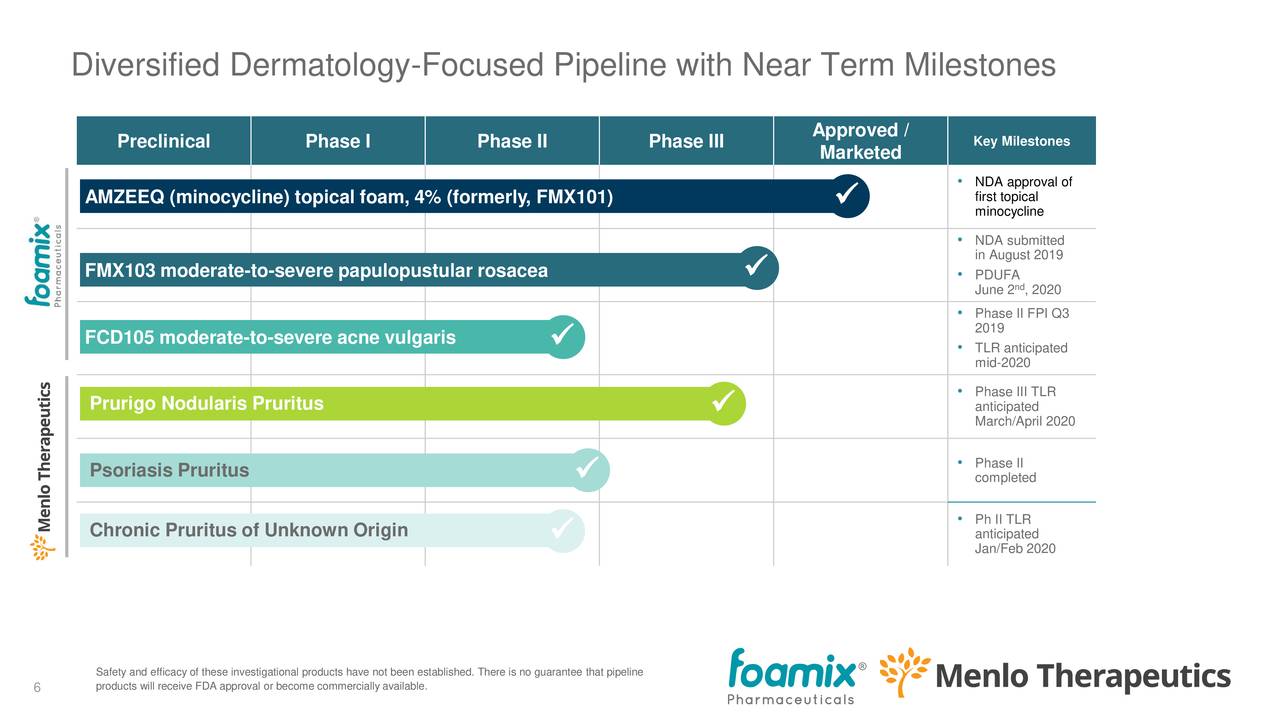 The combined company will have four drugs, but only the first of these is already FDA-approved and about to experience its commercial launch:

Treatments against: Acne (AMZEEQ and FCD105, replacing oral minocycline), Rosacea (FMX103), PM (Serlopitant). Further ahead, Serlopitant could also get indications as a treatment against CPUO and/or psoriasis.

From the earnings deck: 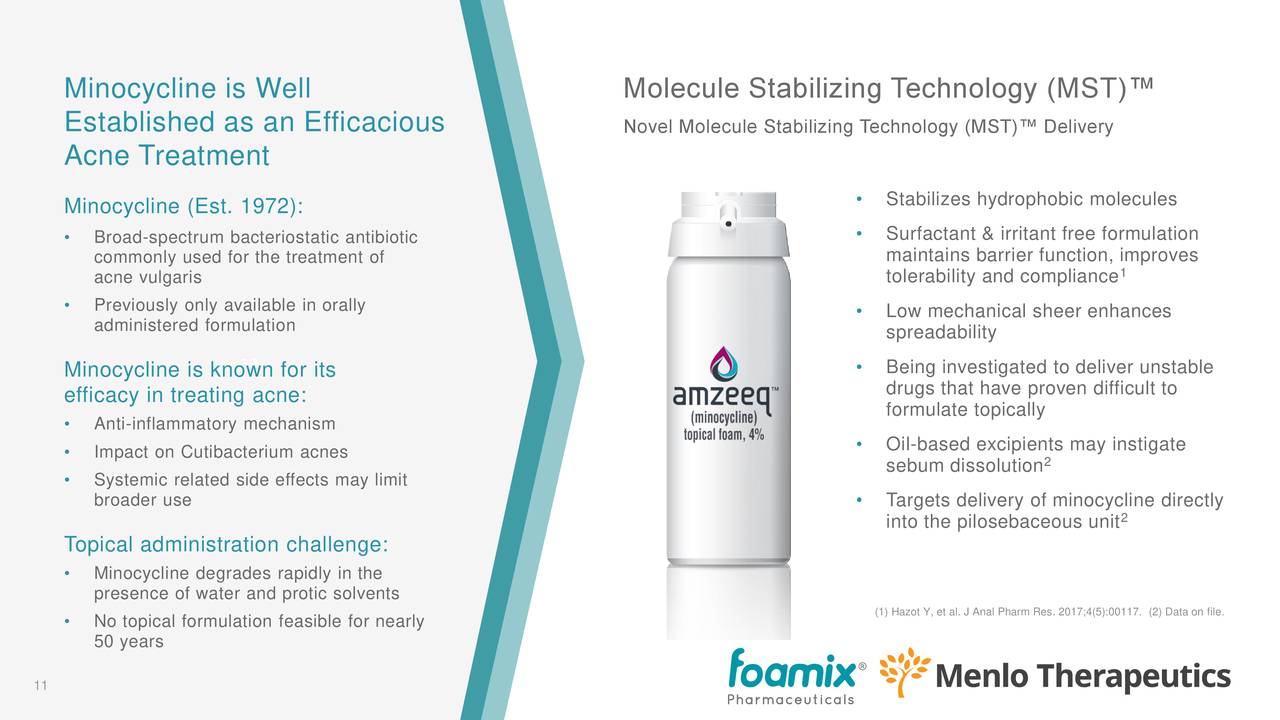 There are additional slides summarizing the outcomes of clinical trials and efficacy studies: 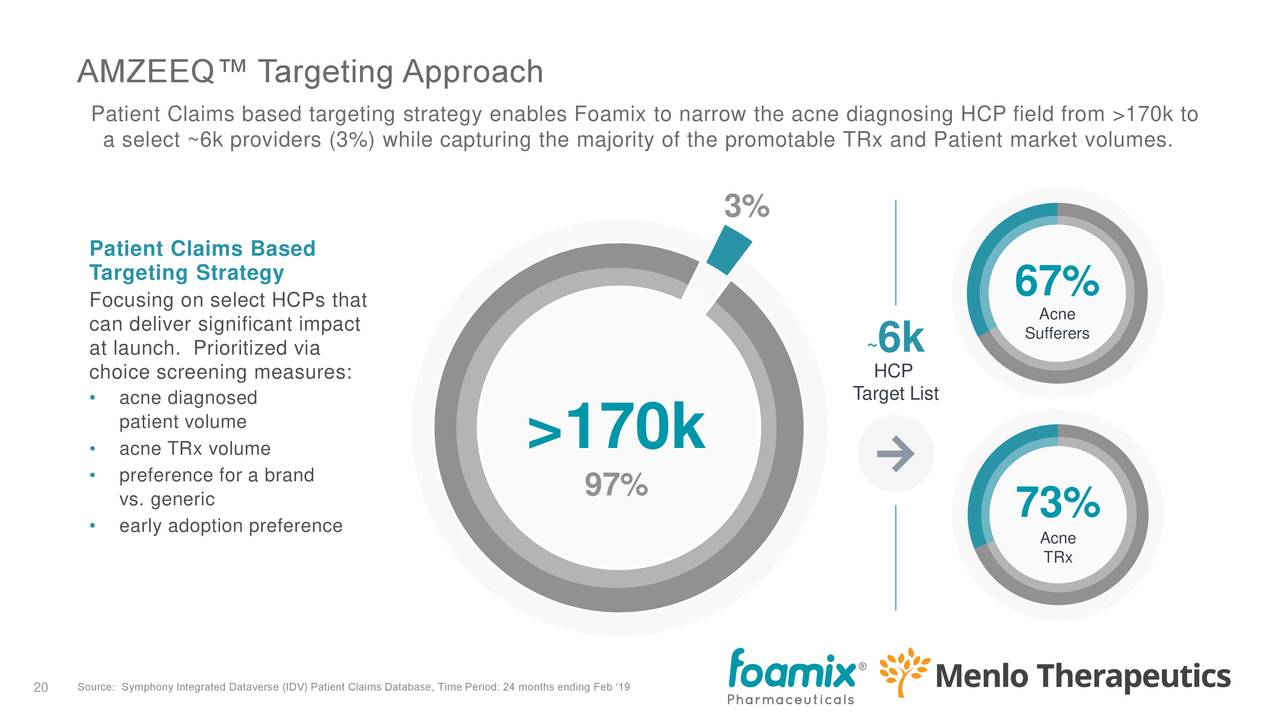 Serlopitant, from the earnings deck: 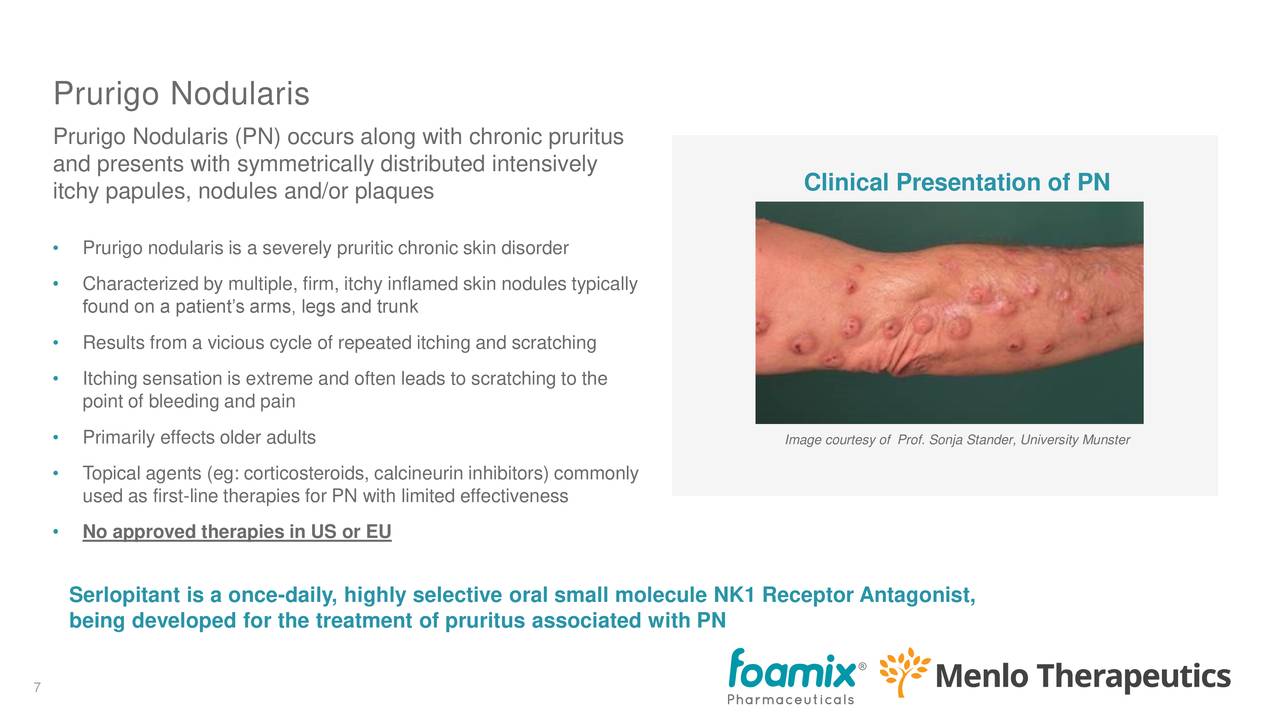 The acne market (for AMZEEQ, FMX103 and FCD105) is a multi-billion dollar market, but there is competition. From the earnings deck: 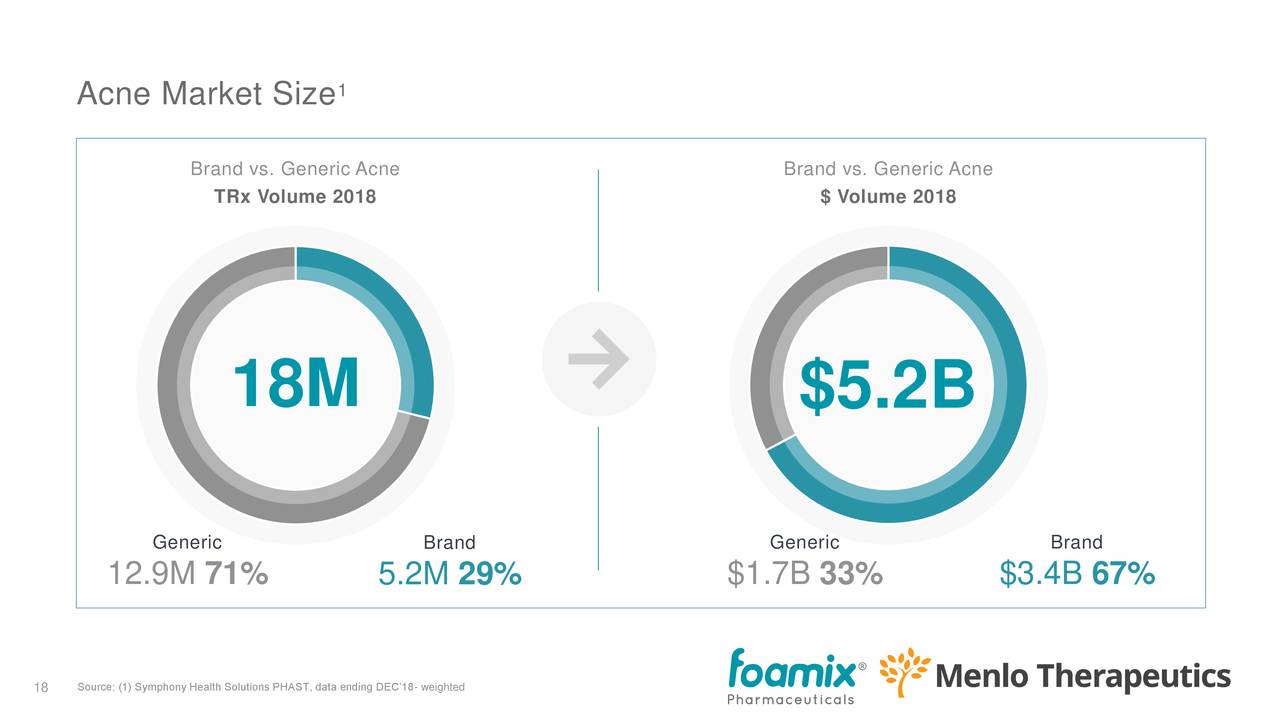 There are some 18 million prescriptions a year. While brands are prescribed only in 29% of these, they bring in 67% of the revenue (versus generic). While there are roughly 170K prescribers, only 3%, or 6K, serve nearly two-thirds of the patients and three-quarters of the prescriptions, which makes targeting a whole lot easier.

The rosacea market (for FMX103) is about a third of the size of the acne market. From the earnings deck: 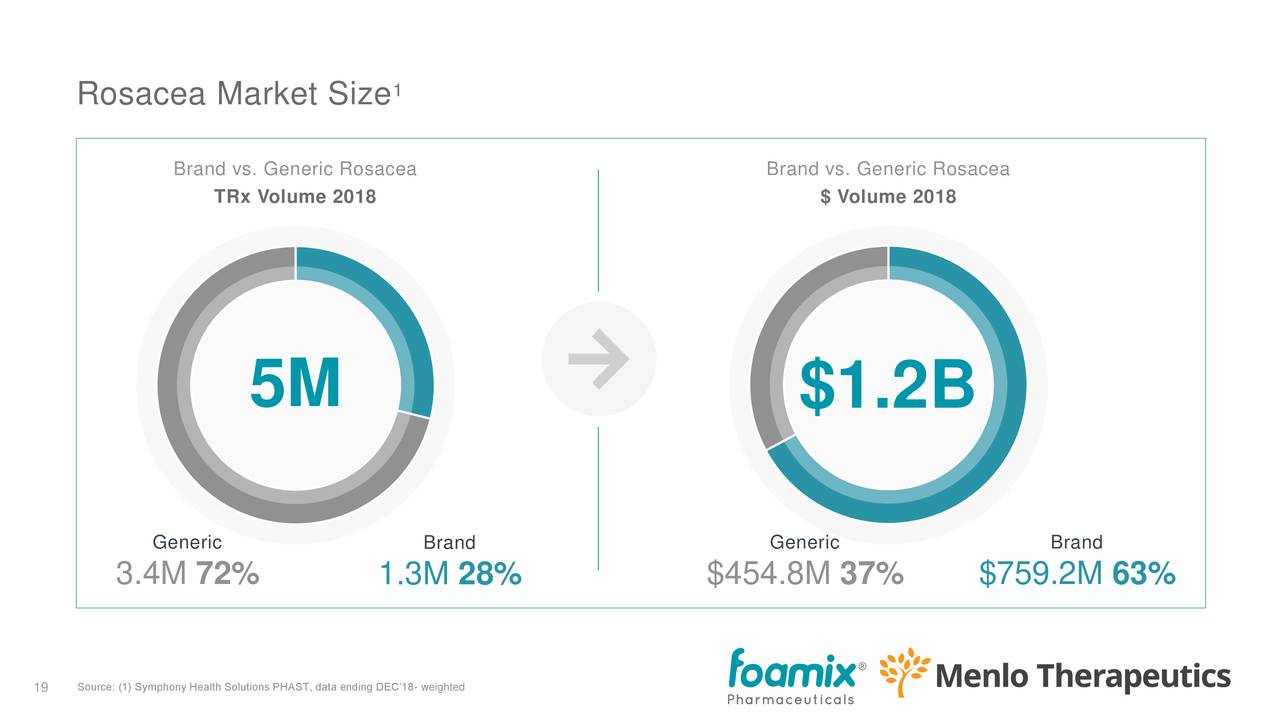 The opportunity is considerable given that there is limited development in the space.

The market opportunity in PN (for Serlopitant), where there is essentially no competition. From the earnings deck: 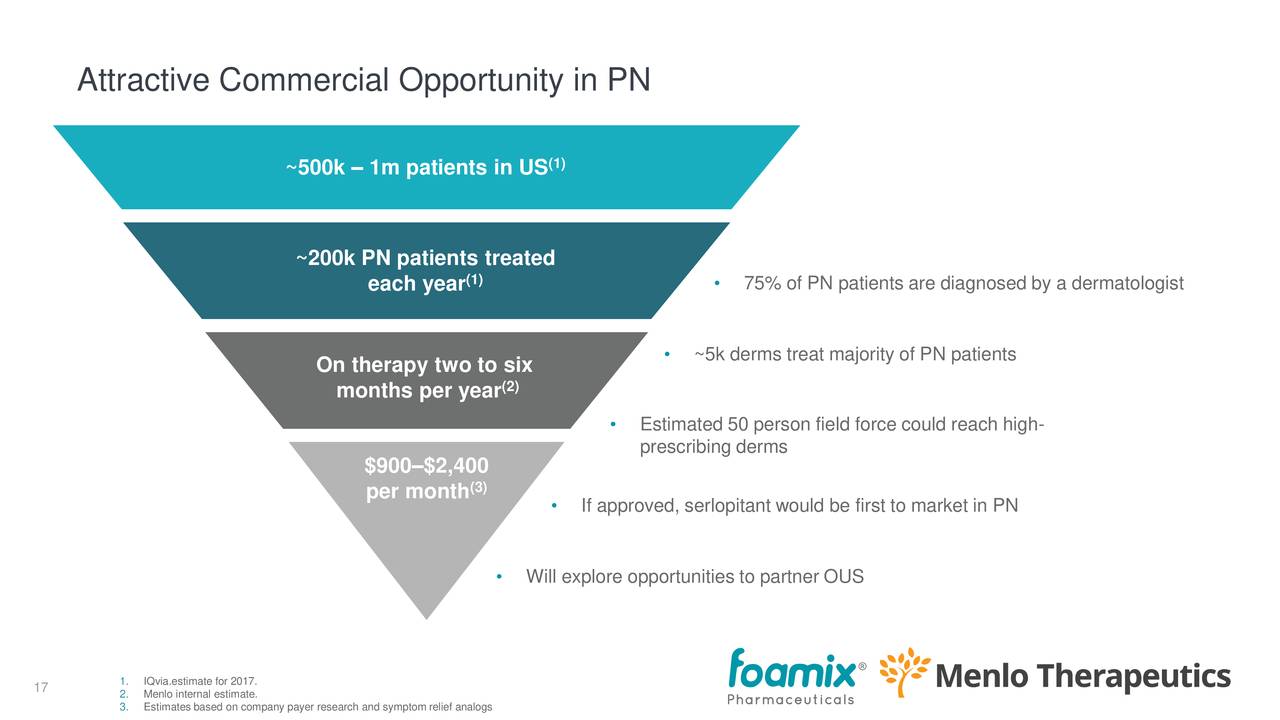 There are 0.5-1 million patients in the US, of which 200K get treatment

What management is also stressing is the high degree of overlap of patient coverage across acne, rosacea and PN, which (Q3CC):

The same sales footprint we will deploy to launch Amzeeq will be leveraged to launch FMX103 in rosacea later in 2020 assuming an approval, as well as serlopitant in 2021, again assuming an approval. Our market research suggests an approximately 80% sales force coverage overlap between Amzeeq and FMX103 and PN… We believe the entire Foamix team and its commercial and scientific infrastructure can be leveraged across all these products

Further down the road, there could be additional opportunities in CPUO and psoriasis. CPUO looks to be a very significant market. Here is Cantor Fitzgerald analyst Louise Chen on the Q3CC:

on the CPUO study, the Phase II data that’s coming up. Since that, has been based on our diligence a very large indication potentially and maybe even larger than PN.

At present, it’s really too early to come up with any kind of quantitative assessment apart from citing the numbers about market size.

For starters, only one of the combined company’s drugs is approved, and while the others look to have a good chance getting approvals, as trials so far have come in with promising results, this isn’t a given.

And even after approval, we can only guess how the drugs will fare, with Serlopitant obviously having excellent chances for lack of competition in the PN drug market.

But these are sizable markets, especially the acne market is a multi-billion dollar market, so even a fairly small market penetration is going to move the needle substantially for the company’s finances.

Here is what each company is bringing (from the earnings deck): 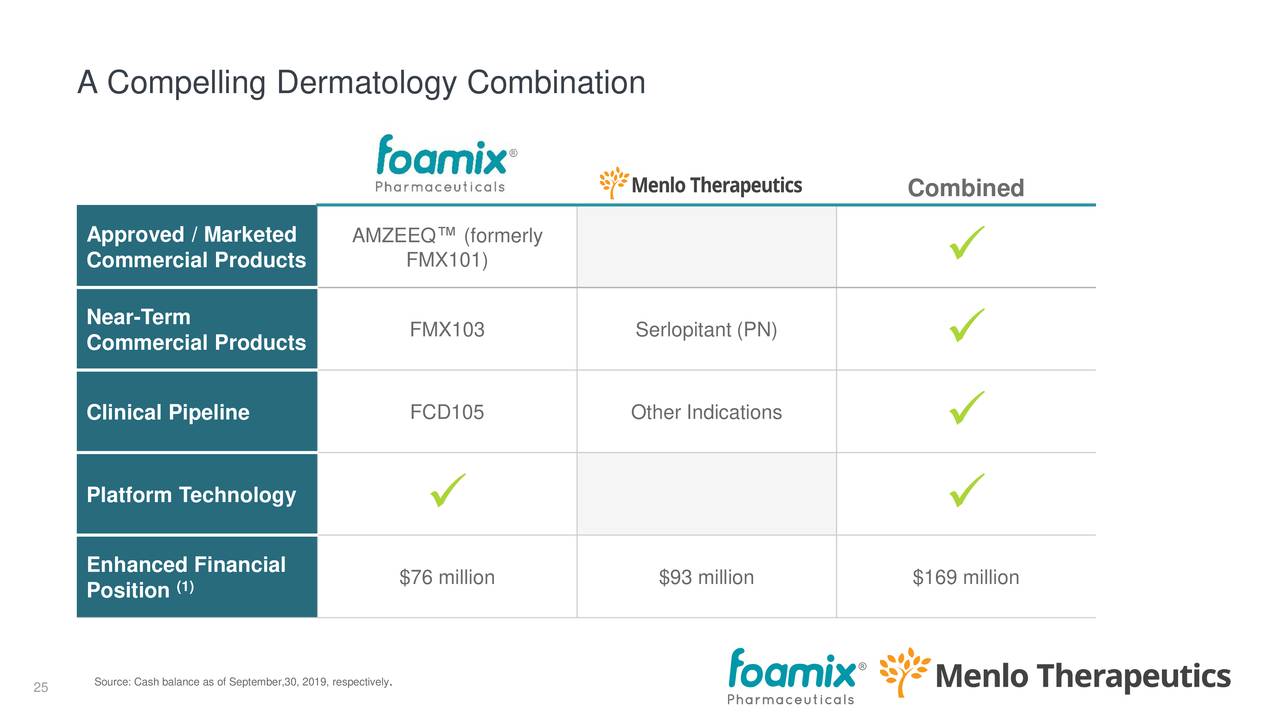 The main rationale for the merger is the synergies (earnings deck): 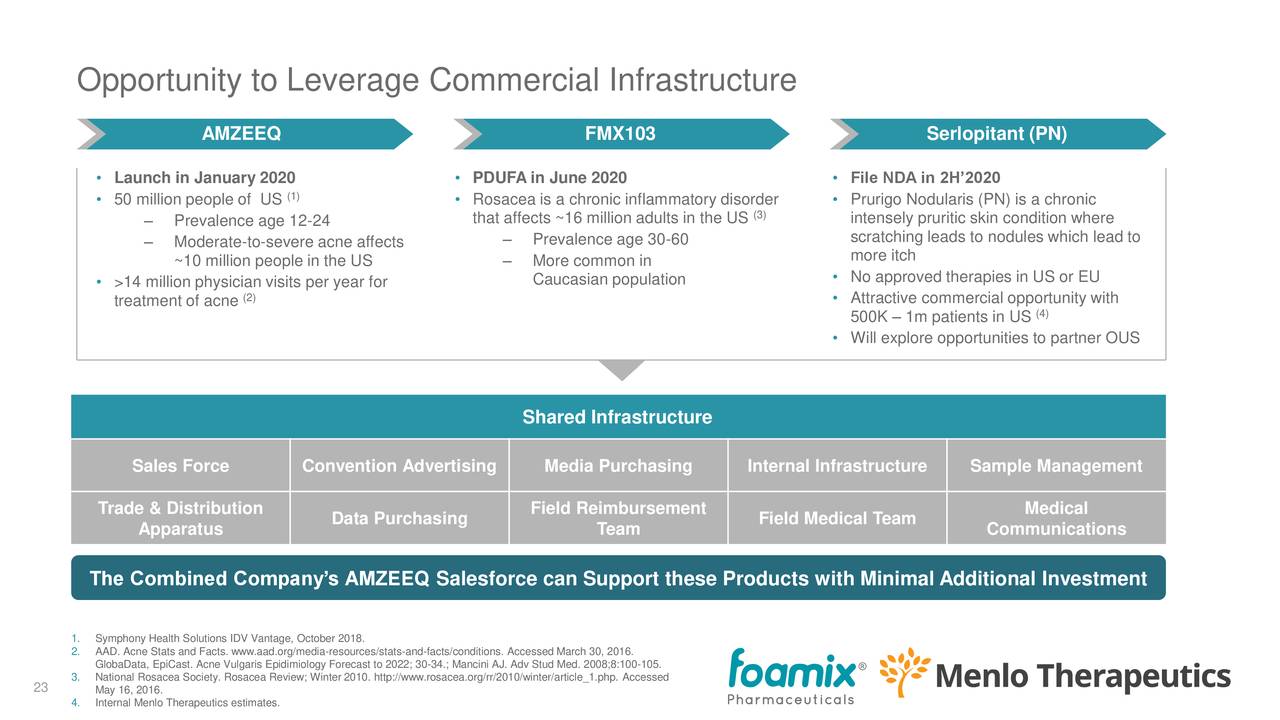 Management believes the synergies, in terms of cost savings, combining capital and leveraging the sales infrastructure, are compelling, and the case seems to solid to us.

The combined company has the potential for three product launches within 24 months, each with a $100 million+ potential.

Since Menlo doesn’t yet generate revenue and Foamix only a little over a million, the most important metric is the cash flow.

Both companies are losing over $60 million a year in cash. Foamix had $75 million of cash and short-term investments at the end of Q3, and Menlo had $91.4 million. Foamix also had $12.9 million in long-term debt.

What have the stock prices done lately? The deal was announced on November 11, and that didn’t get over particularly well with investors: 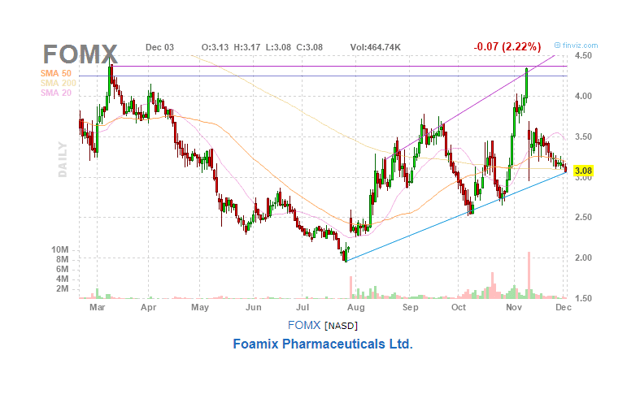 And Menlo shares didn’t do much better: 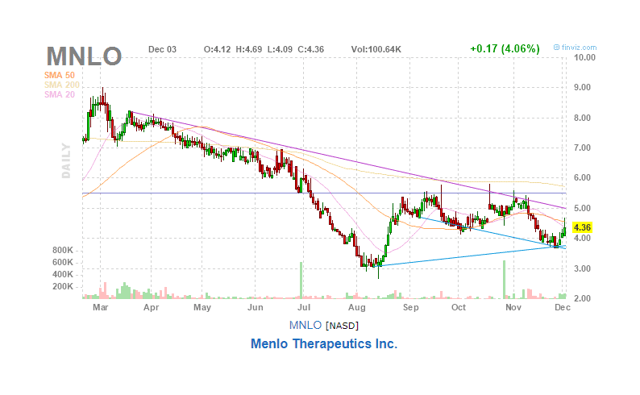 There is also a score of lawyers trying to interest investors in a case against the merger. We are a little surprised at this, as the advantages of the merger seem pretty straightforward to us.

There could be some confusion created by the variety of post-merger ownership rights tied to different outcomes for the two Phase III trials of Serlopitant, but this is a relative ownership size matter and should not see both stocks down.

We are surprised by the negative market reaction to the merger. While Foamix already has an FDA-approved drug that is about to hit the market, combining two companies which have drugs in various state of regulatory approval is reducing risk.

Add to that the cost-cutting and clear synergies, and the ability to leverage the same sales infrastructure through the dermatology channel, and the proposition becomes better.

For Foamix shareholders, one could argue that they are assuming more risk. The risk that if Serlopitant fails one or both of its Phase III trials, its commercial introduction as a PN drug will be delayed or perhaps even canceled.

But then also, the ratio of ownership changes quite significantly, and Serlopitant is a drug that has opportunities in several use cases (CPUA, psoriasis), and the company will have the cash and assets of the company at its disposal.

For Menlo, it’s really hard to think of a downside, as its Serlopitant, if approved, can hitch a ride on a sales apparatus that is already there and the company will participate in the success of other drugs (AMZEEQ at the minimum, but others could be approved as well).

Simply put, we think the merger is good news for shareholders of both companies. It reduces risk and costs, and leverages assets. We struggle to see a downside.