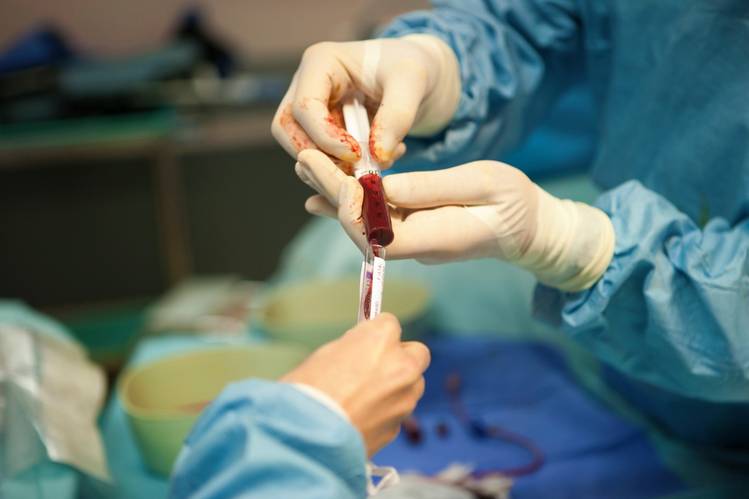 Many bone-marrow transplant candidates don’t get one because of difficulty finding a donor. PHOTO: BSIP/UIG/GETTY IMAGES
By
Ron Winslow

Few procedures in medicine present patients with a sharper double-edged sword than a bone-marrow transplant.

The treatment offers a potential cure for lethal blood cancers such as leukemia or lymphoma and other blood disorders. But it is a highly toxic and sometimes fatal procedure in which patients’ immune systems typically are severely weakened or wiped out with high-dose chemotherapy or radiation. Many patients turn down the potentially lifesaving treatment, fearing that the cure is at least as bad as the disease.

Now several companies, acting on recent scientific advances from academic researchers and others, are racing to develop ways to make bone-marrow transplants safer and more effective. The hope is to increase the number of patients who can be treated with the procedure and extend its use to such debilitating conditions as sickle-cell disease and multiple sclerosis.

“It remains the court of last resort in many people’s minds,” says David Scadden, co-director of the Harvard Stem Cell Institute and director of the Center for Regenerative Medicine at Massachusetts General Hospital. “Until we make it safer and more tolerable, it’s not going to be a therapy other than for those most seriously affected” by their underlying disease.

That will take some time. It’s currently far from certain whether any of the approaches will improve the risk-benefit equation sufficiently to attract more patients to transplants. And even if all goes well with at least one of these efforts, the results are probably at least a couple of years from the market. What’s more, such treatments will likely add significant costs to transplant regimens that can already cost several hundred thousand dollars.

Still, these efforts are the best hope at this point for patients who could benefit from bone-marrow transplants. Companies seeking to solve the transplant problem include Magenta Therapeutics Inc., based in Cambridge, Mass.; Gamida Cell Ltd., of Israel; ExCellTheraInc., Montreal; and Nohla Therapeutics Inc., Seattle.

A crucial part the effort is trying to make umbilical-cord blood a more effective source of the stem cells that are the key to bone-marrow transplants.

Many candidates for a transplant never get one because it is especially difficult to find a related or unrelated donor who is a good genetic match. Researchers say cord-blood stem cells are an attractive option in part because they are genetically immature and can succeed even if they are a less-than-perfect match.

Bone-marrow transplants hold the potential to treat more than just blood cancers, but safety and effectiveness have been problems. 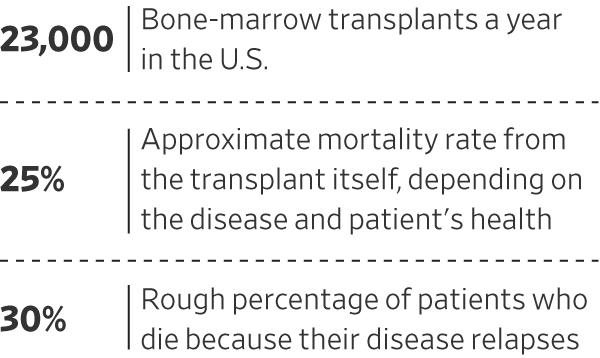 But a unit of cord blood yields only about one-tenth the number of stem cells available from adult blood. Without a sufficient dose of cells, transplants are at a high risk of failing or of taking so long to engraft in the recipient’s bone marrow that patients face lengthy exposure to life-threatening infections. Fewer than 1,000 patients a year in the U.S. get a cord-blood transplant, according to the Center for International Blood and Marrow Transplant Research, based at theMedical College of Wisconsin.

Bone marrow is soft, spongy tissue that resides inside many bones. It produces the stem and progenitor cells that become red blood cells that carry oxygen to the rest of the body, white blood cells that form the immune system and platelets that regulate blood clotting—all functions critical to sustaining life.

Some 23,000 patients undergo a bone-marrow transplant in the U.S. each year, according to the transplant research center. (The procedure is also known as a hematopoietic stem-cell transplant, depending on whether the donated cells come from marrow or the donor’s blood.)

About 60% of patients undergo an autologous transplant, in which their own stem cells are used for the treatment. The rest get allogeneic transplants, where donors can include siblings or unrelated donors determined to be a match. Patients often seek unrelated donors through sources such as Be The Match, a registry managed by the National Marrow Donor Program, a nonprofit based in Minneapolis.

Even when a transplant succeeds, allogeneic patients are vulnerable to graft vs. host disease, a potentially lethal complication that occurs when the newly formed donated immune system attacks a host it sees as foreign.

Results vary widely depending on the disease, where the donor cells come from and other factors, but about 25% of patients die from the transplant itself. That’s down from about 40% three decades ago, says Bronwen Shaw, professor of medicine at the Medical College of Wisconsin and senior scientific director of the transplant research center. About 30% of patients die because their disease relapses, a problem where little progress has been made, she says.

“Even the best survival curves aren’t that reassuring for patients,” says Stephanie Lee, a bone-marrow transplant doctor and researcher at the Fred Hutchinson Cancer Research Center in Seattle. “We have a long way to go to improve things.”

For years, pharmaceutical and biotechnology companies have steered clear of the bone-marrow transplant market. “These are critically ill people, and it’s very difficult to do clinical trials in that setting where there is so much variability,” says Harvard’s Dr. Scadden. “There hasn’t been a commitment on the part of pharma or biotech in this space.”

Dr. Scadden is a scientific founder of Magenta Therapeutics, one of the startups now embracing the area. It is testing a treatment called MGTA-456. Recent data indicate the treatment boosts cord-blood stem-cell numbers by more than 300 times.

In December the company reported “robust” findings from two 18-patient Phase 2 studies, demonstrating the product’s successful and rapid engraftment in both adults and adolescents. The company said the results indicate the drug, which it licensed from Novartis AG , could make more patients viable candidates for cord-blood donations and reduce relapse as well as rates of graft vs. host disease.

Gamida Cell, the Israeli company, made similar claims in December for its cord-blood stem-cell product called NiCord. Data from a 36-patient trial showed rapid engraftment and a relatively low 9.8% rate of moderate to severe graft vs. host disease in patients after one year.

The company cultures cord-blood stem cells in nicotinamide, a form of vitamin B3, for three weeks before transplant. The preparation results in a 100-fold increase in cord-blood stem cells, says Julian Adams, chairman and chief executive officer. NiCord has received breakthrough-therapy designation from the U.S. Food and Drug Administration, potentially speeding the product’s review; it is currently being tested in a Phase 3, or late-stage, clinical trial.

ExCellThera has launched two clinical trials of yet another molecule, called ECT-001, based on research at the University de Montreal. It says its process can increase cord-blood stem cells 35-fold in seven days. Initial experience indicates the approach is “safe and feasible,” the company says on its website.

A temp on the job

Nohla has a different approach that doesn’t require increasing cord-blood stem cells before the transplant. Colleen Delaney, director of the cord-blood transplant program at the Fred Hutchinson center in Seattle and founder and chief medical officer at Nohla, developed a product, based on the discovery of a colleague, that rapidly establishes a temporary blood and immune system to protect the patient while the standard dose of cord-blood stem cells gradually takes hold. One benefit: the patient avoids having to wait for additional stem cells to be manufactured once donor cord blood is found.

The product, called NLA101, is given along with the donor cord-blood cells to patients whose immune systems have been fully wiped out and thus aren’t there to reject the treatment. That means the temporary cells don’t have to be genetically matched to an individual patient and can be readily available off the shelf for a procedure. Once a new immune system based on the donor cord-blood cells takes hold, it attacks the temporary cells.

Clinical results so far indicate among other things that the treatment leads to rapid blood and immune-system recovery and a long-term immune benefit with reduced graft vs. host disease and better disease-free survival, she says. Nohla expects to finish a 160-patient Phase 2 study this year and be ready to launch a Phase 3 trial in 2019.

Mr. Winslow is a writer in Bethel, Conn. Email reports@wsj.com.