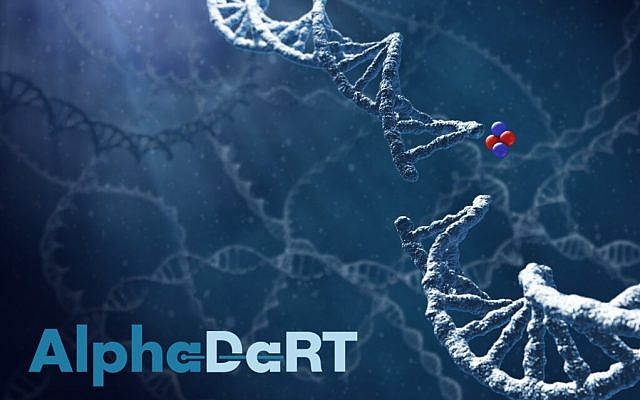 An illustration of how an Alpha particle can cause irreperable breaks in the DNA of cancer cells; Alpha Tau Medical says it has developed a technology in which these alpha particles can live long enough to destroy the cells (Courtesy)

Tel Aviv-based startup Alpha Tau Medical claims it has developed a technology that can cure tumors by injecting them with radioactive material that attacks and destroys the cancer cells. The procedure takes two hours or less and can be performed anywhere, the company says.

In the treatment, called Diffusing Alpha-emitters Radiation Therapy (DaRT), a needle containing radium-224, a radioactive isotope, is inserted into the location of the tumor. Once positioned, it emits alpha particles that have the capacity to exterminate the cancer cells. These particles are known to have the ability to cause irreparable breaks in the DNA of these cells.

The problem with using alpha cells in cancer treatment is that they decay and lose effectiveness very quickly. So the Israeli firm came up with a system that uses a needle armed with radium-224. This needle is injected into the tumor, where it releases the radium. As the radium decays, after about four days, it releases “daughter atoms” that spread within the tumor and emit high-energy alpha particles, which target the cancer cells.

“This is the first time in the world that you can treat solid tumors,” which are the most common, with alpha radiation, CEO Uzi Sofer told The Times of Israel in the lounge of a Jerusalem hotel. The treatment itself can be conducted anywhere, “even here,” he exclaimed, pointing to his surroundings, where waiters bustled about, ferrying drinks to and fro. “It is like going to the dentist,” he said.

The company developed various kinds of special applicators that allow the injecting of six needles or “darts” simultaneously with a minimally invasive procedure, he said. The treatment, delivered under local anesthesia, can take 30 to 120 minutes depending on the location of the tumor, said Sara Jaehnert, marketing and communication manager at the startup.

The darts need to be maintained embedded in the surface for at least two weeks to give the alpha particles time to destroy the cancer. In the case of a cancer of an internal organ, the darts can be left inside forever because they are biocompatible, Sofer explained.

The system developed by Alpha uses the short lifespan of the alpha particles to its advantage – after they destroy the cancer cells their effectiveness wanes, so they don’t affect healthy cells.

Jaehnert said that no side effects had been observed during clinical trials held by the company in Israel and in Italy, and any local, “non-severe” side effects “were resolved within one to two months.” 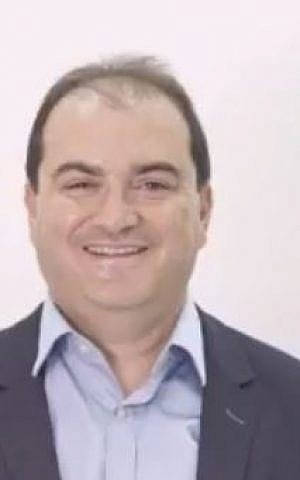 The company said that the procedure can also help avert the future development and spread of the cancer in the patient.

After the ablation, the immune-system starts to recognizes the tumor cells as unhealthy ones and kills them, she said, basically working like a vaccination for specific tumor cells.

Sofer cited the example of a woman who had been treated at the Romagna’s Scientific Institute for the Study and Cure of Cancers (IRST), in Italy. He said that she used to have a recurrent tumor in her right leg and that after the treatment, it disappeared within a month. The best news, however, was that the two lesions of the left leg that the doctors planned to treat 30 days later disappeared because of an abscopal effect – a rare phenomenon that occurs when treating a tumor leads to the withdrawal or disappearance of other metastases present in the body.

After the system is used, the body learns “what to find and what to destroy,” Sofer said.

The treatment can be delivered regardless of the tumor stage, even though it is clearly better to intervene as soon as possible and it is much more difficult  to cure patients who have several metastases, he said. Anyway, he underlined how DaRT can be implemented concurrently with other therapies, such as chemotherapy.

After testing the technology on more than 6,000 animals, it took Alpha Tau Medical less than a year to start clinical trials on humans, in February-March 2017.

“Right now, we have evidence for squamous cell carcinoma and we have 12 protocols that we are developing all around the world to treat patients with different solid tumors,” Sofer said, adding that they were about to start new trials with patients suffering from tumors of the pancreas, breast, kidney, vulva or prostate, or from sarcoma. 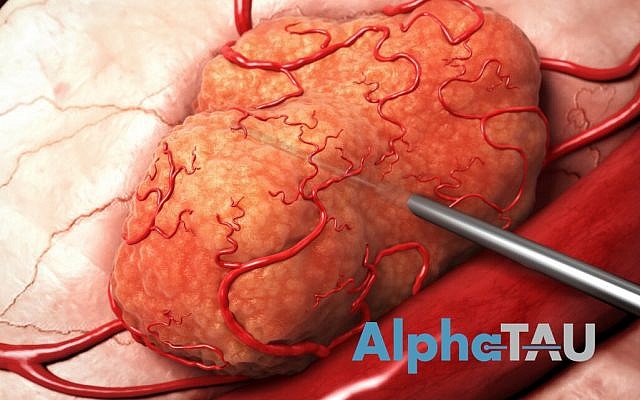 An illustration of how a needle containing Alpha particles is inserted into a solid tumor; Alpha Tau Medical says it has developed a technology in which these alpha particles can live long enough to destroy the cells (Courtesy)

In fact, DaRT could be used “to treat any kind of solid tumor,” he said.

Sofer displayed images of how the technology was used to cure tumors in cheeks, ears and head, and how patients’ growths had significantly reduced in size and visibility within 60 days.

Alpha Tau Medical is currently carrying out two clinical trials for squamous cell carcinoma (SCC) of the head, neck, and skin, one at the Rabin Medical Center in Israel and the other in Italy, Sofer said. Twenty-seven patients have been treated to date, Jaehnert said.

The preliminary results were ”sensational” said Sofer. All patients responded to the treatment and 73% saw their tumors disappear, he said.

Sofer noted that the company was also working with cancer centers around the world, including the Memorial Sloan Kettering Cancer Center in New York, the M.D. Anderson in Texas, and the Istituti Fisioterapici Ospitalieri(IFO) in Rome.

Alpha Tau Medical wants to be a part of the $1 billion solid tumor market, with an early incident number of millions of patients around the world “waiting for this hope,” he stated.

“We pray and believe that by next year we will have the first approval in Europe and then we’ll have approval in the US and Japan, with a very clear roadmap for each country,” Sofer said.

Sofer founded Alpha after he left his previous venture, Brainsway, a firm that focuses on the treatment of brain disorders and whose shares are now traded in Tel Aviv.

Alpha Tau’s product is based on technology developed in 2003 by Prof. Yona Keisari and Prof. Itzhak Kelson at the Tel Aviv University. 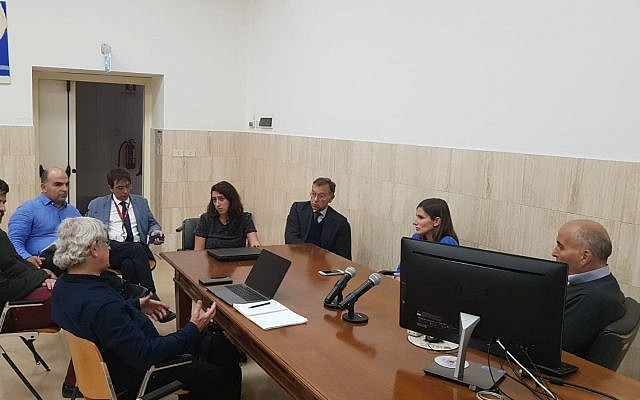 The startup already has a production facility in Israel and is building a new one in Massachusetts, with more to come in Europe and Japan, said Sofer.

Meanwhile the firm has started two additional clinical trials in Italy, one of them at La Sapienza, in Rome, and has raised some $29 million in a third funding round from various angels and VCs, Medison Pharma, several investors from the US and Europe, Shavit Capital – an Israeli investing firm focusing on late-stage investments, crowdfunding platform OurCrowd, and billionaires like Ronald Cohen, Alan Patricof, plus the previous investors, Sofer said.

Asked about future developments of the company’s products, Sofer said Alpha Tau Medical is now integrating its therapy with ultrasound and CT-guided applicators to treat lung, pancreatic and leaver cancers by inserting the alpha-emitting device while at the same time “putting a fiducial marker or taking a biopsy.” Mass production is the firm’s goal, he said, adding that it was going to improve its results by combining its technology with different immune therapies.

“We feel that it is really breakthrough and game-changing in the field of oncology,” he said. “We are really seeing a miracle.”